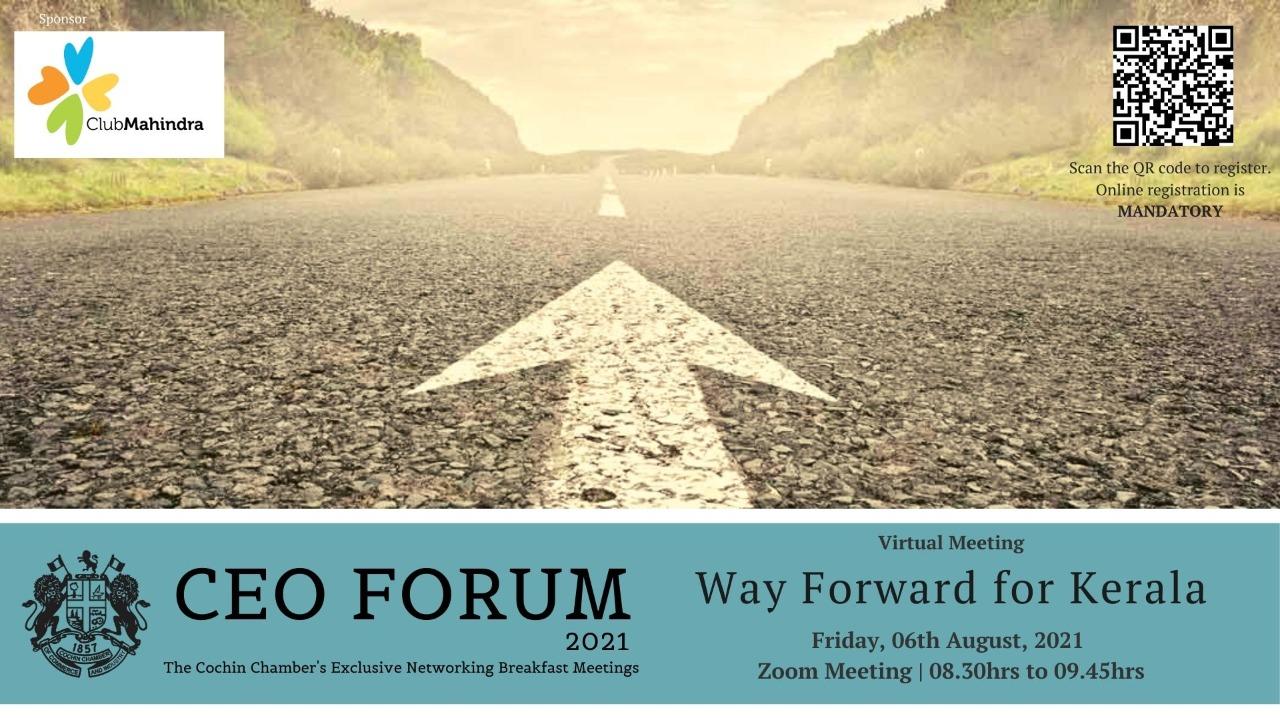 Mr. T. Nandakumar IAS, Former Secretary to Govt of India, was the Speaker. He spoke on the topic, “Way forward for Kerala.”

Mr. K. Harikumar, President of the Chamber welcomed the participants and gave a quick introduction of the Guest Speaker.

Mr. Sanju, General Manager of Malabar Coast Recruitment Services Pvt. Ltd., who is a new Member of the Chamber, was invited to give a brief overview about his company and their services to the members of the Forum.

Mr. Nandakumar, started his talk by thanking the Chamber for giving him the opportunity to interact with the CEOs. In his opening remarks Mr. Nandakumar spoke about the formation of the Committee and the decision to get in touch with all the important trade bodies in Kerala to get specific suggestions. He also said that he expects to get papers from the associations on the matters concerning the State which they will go through and then decide as to whom they will go forward with meeting.

Talking about the way forward for Kerala, Mr. Nandakumar said that his advantage was that he looks at the State as an external person. This will help him not to get into a lot of details but rather look at issues on a broader angle so that he can try and make a few provocative suggestions. He highlighted the advantages of our state such as the Human Development Index, the Literacy Rate, the Public Education, the public Health System, Sanitation, Women empowerment etc.

He said that, somewhere along the line he felt certain verticals such as the education system in Kerala, which were well recorded earlier has started to crack. Even though Primary and Secondary Education in the State is doing okay, he doubts that the Higher Education is upto par when compared to the other states in our Country. He stated that this is probably because of the emphasis on good quality public education has been lost. Similar issues can be found in other sectors as well.

Mr. Nandakumar said, although our numbers are okay on a national level, if we need to sustain our efforts, we will need more economic growth.

Later in his address, Mr. Nandakumar pointed out several issues where intervention to improve and grow was needed.  He also spoke about plan funds and told that their major programmes are, -poverty reduction, social infrastructure development etc.

There are several issue that are faced by our State, a few of them such as the issue of managing expenditure of the Government, issues of Governance, Financial Discipline, Public Service Delivery Act, etc. were touched upon in Mr. Nandakumar’s Address.

He said he is concerned about the preparations our Government is making in order to upskill our future generations for future Jobs. “We need to understand what future jobs are and train our next generation accordingly so that they can be skilled workers in our country and abroad.” “This is one area where the Higher Education system in our state will need a serious Overhauling” he said.

Concluding his address, Mr. Nandakumar raised a though provoking question to everyone by asking the CEO’s to think to themselves as educated people, what is the contribution they have done to the state and if it is enough for us to grow as a community.

Mr. P.M. Veeramani, the Vice President of the Chamber delivered the Vote of Thanks