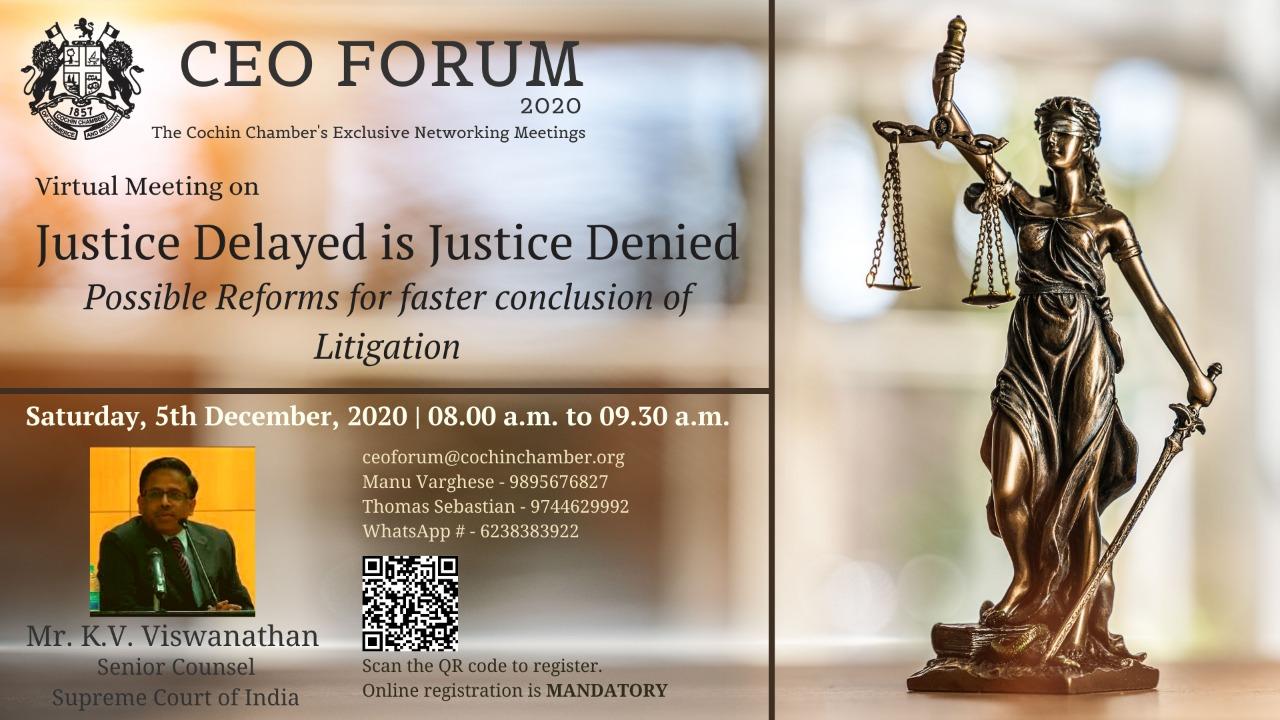 The Chamber organized a virtual CEO Forum Meeting on Saturday the 5th of December 2020.

The Chamber President, Mr. V. Venugopal delivered the Welcome Address and introduced the Guest Speaker, Mr. K.V. Viswanathan, Senior Counsel of the Supreme Court of India to the participants.

Thanking Mr. Venugopal for the introduction and his opening remarks, Mr. Viswanathan said that he agreed with two fundamental issues raised by Mr. Venugopal in his Welcome Address. First, the fact that there is a lack of consistency in the verdicts handed down by the various Courts in the country and second, the situation wherein retiring Judges are offered and take up positions of influence immediately after retirement is a matter of serious concern and sends out a very negative message regarding the impartiality of Judges in carrying out their duties. Mr. Viswanathan was of the view that, as in other countries, there should be a mandatory cooling off period before a retiring Judge takes on new responsibilities. He also said that the lack of consistency vis-à-vis verdicts, off late, is a matter of concern as it affects the credibility of the judiciary and the confidence reposed in them by litigants.

Speaking about the delays in the Courts and the need for reforms for the faster conclusion of litigation in the judicial system, Mr. Viswanathan said that there are different dimensions to be considered. One of the critical points he raised was that many Courts in the country have a large number of cases pending due to the complexity of the issues to be adjudicated upon. While the expeditious disposal of cases is a must it is also essential to ensure the services of an impartial Economic Wing that will help analyse complex matters and advise the Courts as to the actual position. He cited the example of the recent Coal and Telecom cases that involved weighing huge business and economic implications. Unfortunately, our law enforcement agencies lack the required expertise in analyzing and providing detailed advice to the Courts in such matters. Mr. Viswanathan opined that unless the Government and the lawmakers at various levels consider this dimension in business related cases, it could lead to more pendency of cases that will further clog up the judicial system and also result in erroneous interpretations that could have wide ranging negative impact on the country.

Mr. Viswanathan suggested that the Chamber should consider setting pressure groups that will press the Government to consider appointing economists or other experts to panels that can advise the Courts in such cases. This, he said, will help in expediting the clearance of pending cases in the judicial system.

Mr. Viswanathan also stressed the need for renewed efforts to promote Arbitration/Mediation as alternate legal remedies that will help reduce the burden on the Courts. He called on the Chamber to aggressively promote and encourage businesses to consider the formation of an Ombudsman, which will help settle disputes out of the Court. This will also help businesses save time and money otherwise spent on pursuing cases through the existing judicial system.

Speaking about the IBC, he said that the National Company Law Tribunal (NCLT), the adjudicating authority for the Companies Act, Insolvency and Bankruptcy matters and also the Competition Act is struggling to handle the huge number of matters pending due to the lack of adequate Benches across the country to hear these cases. This issue needs to be addressed urgently. He also addressed the current Operational Credit Mechanism under GST, where some suppliers are asking for Security, which basically acts as a hindrance to the Ease of Doing Business. He emphasized on the importance of the judiciary in relation to The Ease of Doing Business Index, which values the time and cost for resolving commercial disputes in the country.

Some of the other areas touched upon by Mr. Viswanathan in his address was the Pre-Deposit Clause on Taxation, Fast tracking of Industrial Relations Code related cases, MSME Sector etc.

In his closing remarks, Mr. Viswanathan said that in an international scenario, a country that does not have an independent, robust and efficient judiciary, reflects badly on the Government and its efforts. He said that it is upon the Government and Businesses to work together to ensure that the necessary reforms in the judiciary are implemented at the earliest for the benefit of all.

Following his talk Mr. Viswanathan interacted with the participating CEO’s and answered the various queries raised by them.

Mr. K. Harikumar, Vice President of the Chamber proposed the Vote of Thanks.