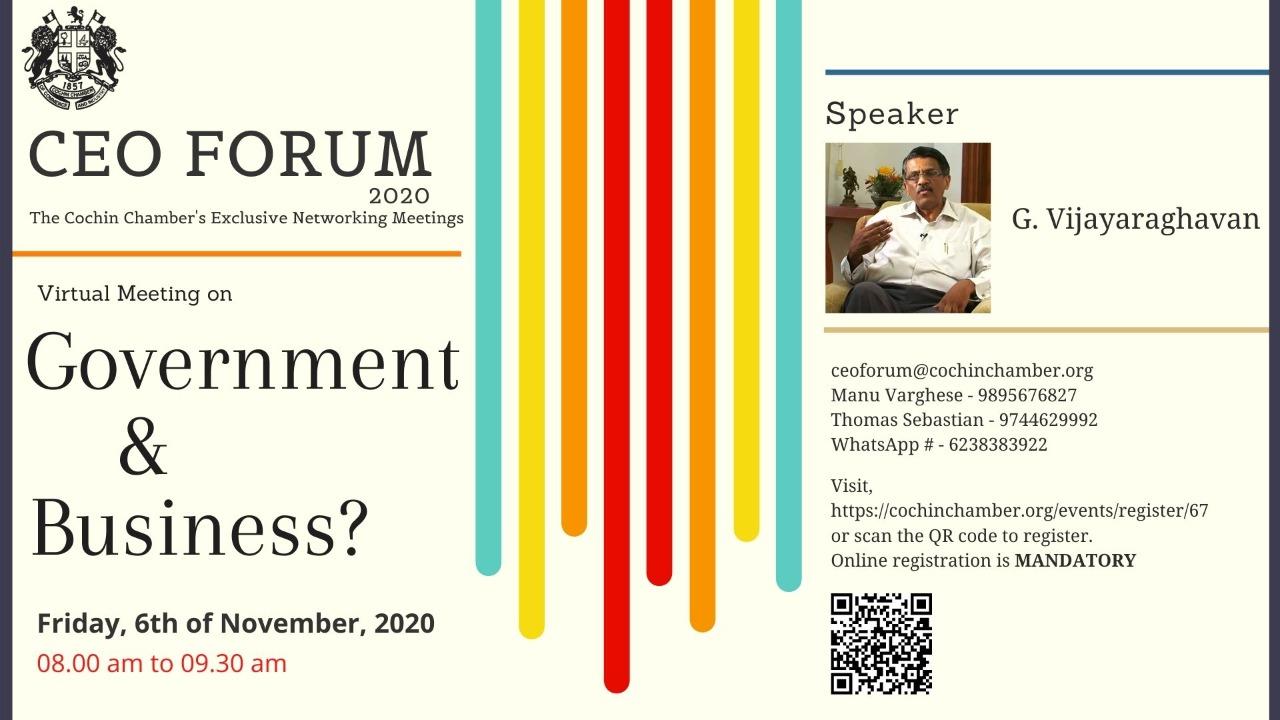 The President of the Chamber, Mr. V. Venugopal commenced the meeting by welcoming the Speaker for the day Mr. G. Vijayaraghavan and the participants to the 11th CEO FORUM Meeting.

In his welcome address, Mr. Venugopal pointed out some concerns pertaining to the Government doing business, the continuity of CEOs in Public Sector Companies etc. He also introduced the Speaker Mr. Vijayaraghavan to the participants as Founder CEO of Technopark and Former Member, Kerala State Planning Board.

Mr. Vijayaraghavan, in his address, thanked the Chamber and the President for inviting him to be the Speaker at the Session and for allowing him to express his views on the topic – Government and Business. He then briefly introduced the topic of the session and main aspects that he will cover.

In his introductory remarks, Mr. Vijayaraghavan emphasised that the purpose of a Government is Governance including Social Welfare activities, upliftment of people who need support in the Society etc. A Government’s mandate does not include doing business. He touched upon the differences between a Bureaucrat and a Politician, corruption in Kerala, and the expectations from the Society at large. Mr. Vijayaraghavan explained why the Central Government is now backing out of businesses which they were earlier a part of. He said that there is no need for a Government to be involved in any sort of Business undertaking which is not profitable. He cited the example of KTDC holding a lot of properties across the State which isn’t making money and is actually a burden on the Government. “Such properties could have been done up much better if someone actually owned them other than the Government,” he said.

Mr. Vijayaraghavan said that the main problem with the Government running a business or a particular property is that no one really owns it. He said that everyone who works in the Government-owned business thinks that the money they spend belongs to the Government and fails to realise that it actually is the people’s money which is spent. Mr. Vijayaraghavan painted a vivid picture of how Governments run businesses and how the real state of affairs of these businesses is revealed at the time of the audit.

Corruption in these Government undertakings runs deep he said even though claim are laid to say that it is all for the benefit of the general public and the State.

Mr. Vijayaraghavan added that it now appears that the whole idea of a Government is to cater to specific groups of people, their accomplices and the powers that be.

Towards the end of his session, Mr. Vijayaraghavan highlighted the importance, role and responsibility of the Media in our society. The problem with Media these days is that, they are all behind their ratings and viewership, and for this every news channel’s priority is sensationalizing even the smallest of matters, he said. Mr. Vijayaraghavan suggested that the Chamber conduct yearly sessions with the Media, bringing them together to discuss matters of concern, eradicating corruption in the Media, and to explain to them what is expected of them by a society that is literate and discerning as is the case in Kerala.

Concluding his session, Mr. Vijayaraghavan said that the right thing to do is to achieve a balance whereby the Government sector and the Private Sector work together in such a manner as to leverage the best of both sides. This approach will focus more on the development of the society and the State, he said.

Following Mr. Vijayaraghavan’s address Member CEOs of the Chamber raised several questions, expressed views and discussed the current state of affairs in Kerala and how we can jointly work to remedy the situation.

Mr. K. Harikumar, Vice-President of the Chamber delivered the Vote of Thanks.

The session was attended by 30 people.