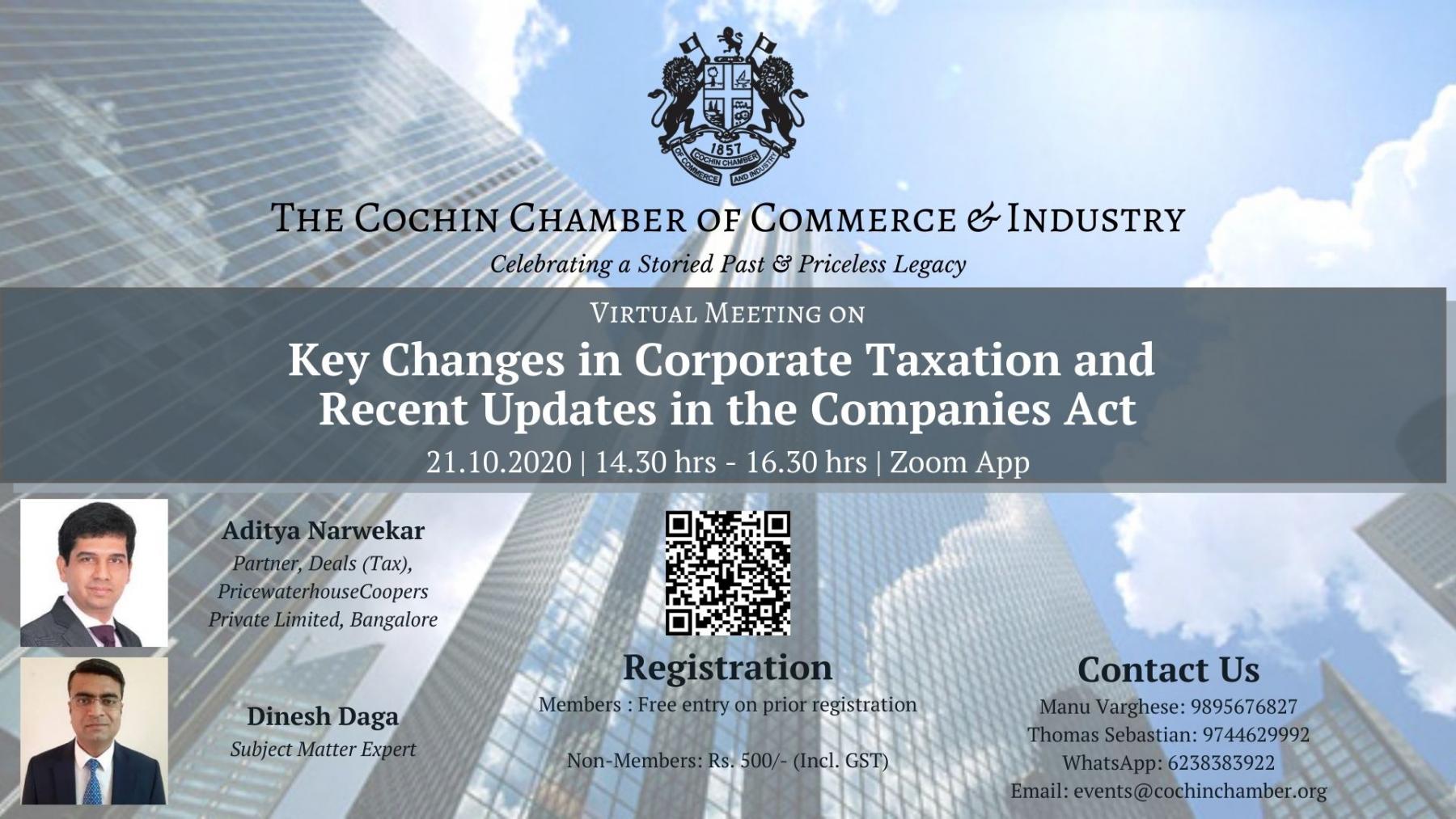 A Virtual Meeting on the “Key Changes in Corporate Taxation and Recent Updates in the Companies Act” was conducted by the Cochin Chamber of Commerce & Industry on the 21st of October, 2020. The Session was handled by Mr. Aditya Narwekar, Partner, Deals (Tax), PricewaterhouseCoopers Private Limited, Bangalore, Mr. Himanshu Aggarwal, Associate Director in PwC India’s deals team and Mr. Dinesh Daga, who is a subject expert.

Mr. V. Venugopal, the President of the Cochin Chamber, welcomed all the participants and the Speakers to the Meeting. He thanked PricewaterhouseCoopers, the Cochin Chamber’s Knowledge Partner for associating with the Chamber in this programme. After welcoming everyone, Mr. Venugopal gave a quick overview of the topic for the day. “As we near the due date for filing the Corporate Tax Returns, this session will throw some light in the introduction of Faceless Assessment to maximise Governance and to minimise Government,” he said. Mr. Venugopal said that the Companies Amendment Bill 2020, which received the approval of the President of India on the 21st of

September, amended various acts from the Companies Act of 2013, to promote the ease of doing business. These changes will also be elaborated upon by the experts handling the session. Thereafter he introduced the Speakers to the participants.

Mr. Narwekar thanked the President and the Chamber on behalf of PwC for having organised the Session. He then started off with the first part of the presentation pertaining to the Companies Act, 2020. He said that the Companies Act of 2013 has undergone several changes from the time it was introduced. Mr. Narwekar said that the plan of the Government over the years was to relax the provisions that came under this Act since, when it was introduced, there hardly was any difference between a private company and a listed company. This apparently created a lot of complications and burden on the private companies. Mr. Narwekar took the participants through the background of the Companies Act. He explained that there was a Company Law Committee that was set up in 2019 to make recommendations to the Government to make changes and promote ease of doing business. This Committee was also tasked to re-categorise certain compoundable offences. Following this, Mr. Narwekar explained the timeline of the development of the new Act and touched upon the highlights of the amendments. He spoke in detail about the amendments under the CSR provisions, Periodical Financial Statements for unlisted companies to monitor Private Companies, remuneration to independent Directors and Non-Executive Directors in case of losses, and overseas listing of public companies.

Mr. Himanshu Aggarwal commenced his presentation with the Exclusion from the definition of listed companies and other amendments relating to the ease of doing business in India. He explained in detail regarding the Decriminalisation of offences by reducing the quantum of penalty, omission of imprisonment, shift of fine to penalty and omission of penal provisions. Following this there was a quick Q&A session to clarify any doubts that the participants had.

Tax Collected at Source (TCS) on sale of goods was the next topic addressed by Mr. Daga. The TCS has come into effect from the 1st of October, 2020, he said. The CBDT clarification on TCS on sale of goods was also explained. The last part of the presentation was on Taxation and other Laws Amendment Act (TOLA). Mr. Daga helped the participants understand the highlights and features of TOLA before he opened the meeting for Q&A.

Mr. Venugopal concluded the session by thanking Ms. Nisha Menon of PwC for coordinating the meeting, and the speakers and the participants who attended the programme.

The session was attended by around 45 participants.