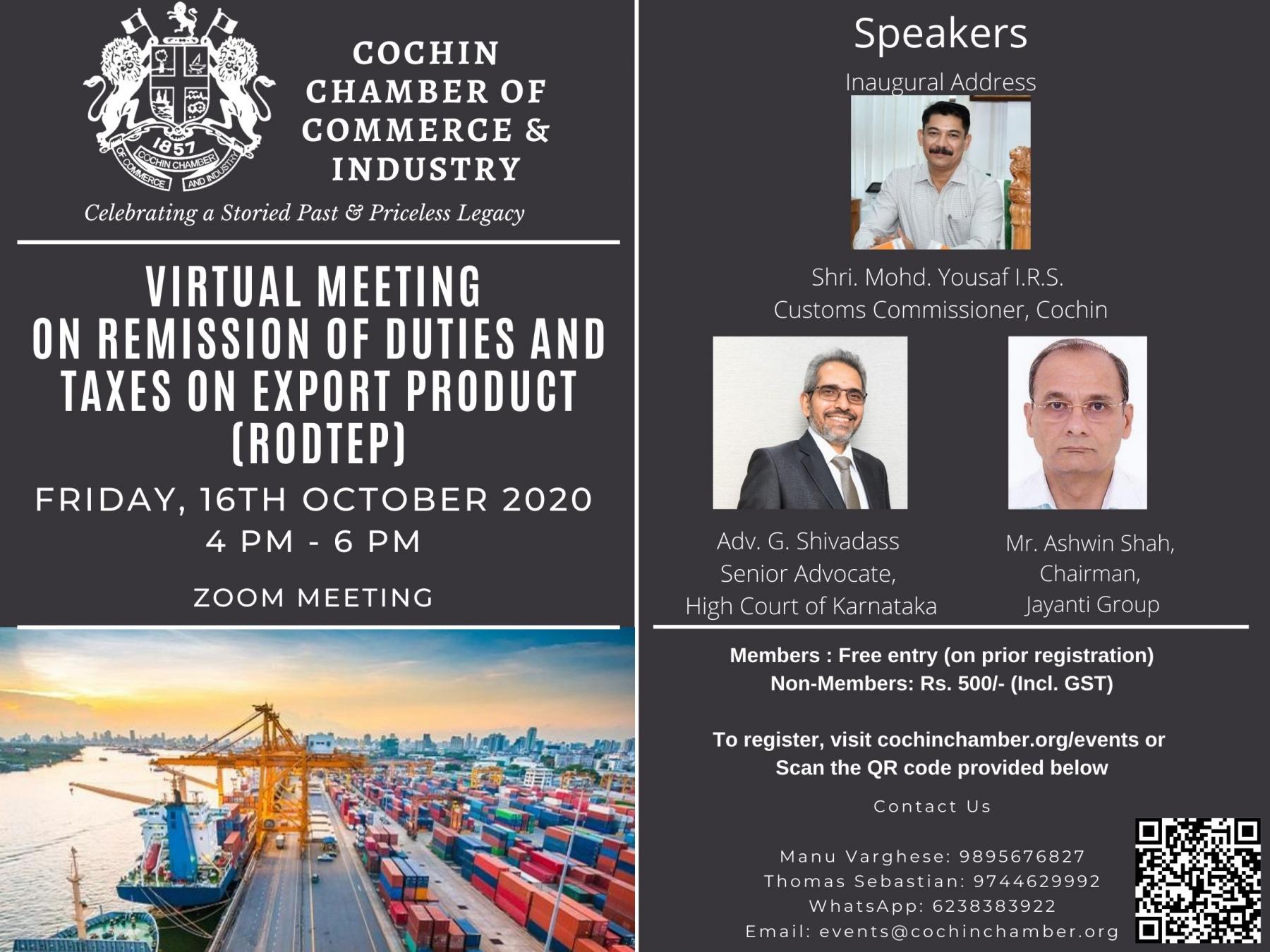 The Cochin Chamber of Commerce & Industry organised a two hour Virtual Session on the Remission of Duties and Taxes on Export Product (RoDTEP) on the 16th of October, 2020.

The Session commenced at 4 p.m. with a Welcome Address by the President of the Cochin Chamber, Mr. V. Venugopal. In his speech, Mr. Venugopal gave a brief introduction about RoDTEP, its importance and the expectations the industry has about the new scheme. Thereafter he introduced the Speakers for the Session, Mr. Mohd. Yusuf I.R.S – Customs Commissioner, Cochin, Mr. G. Shivadas – Senior Advocate at the High Court of Karnataka and Mr. Ashwin Shah, Chairman, Jayanti Group, Bangalore.

Inaugurating the programme, Mr. Yusuf expressed his thanks to the Chamber and the President for having invited him to participate in the event. The Commissioner started off his address by saying that the Exporters are the economic lifeline of our country and that they must be taken care of well. He then talked about the MEIS Scheme and its drawbacks. He said that this is the reason why the new RoDTEP Scheme is being introduced. He concluded by saying that the Committee formed to assess and improve the RoDTEP Scheme may not be able to directly visit the exporters to get feedback as planned because of the pandemic, but hoped that

Industry bodies such as the Cochin Chamber will help in voicing their views on the new Scheme with the Committee and help them improve it for the better, for the overall benefit of the exporting community.

After the Inaugural Address, Mr. Ashwin Shah, Chairman of the Jayanti Group, Bangalore, representing Industry, pointed out certain concerns he found in the previous scheme and his expectations about the new one. His opening statements were on the history of export incentives in India. Mr. Shah said that the main objective of having incentives in exports is to make the Indian markets stronger. He pointed out that, as fuel prices in India do not come under GST, the cost of producing goods in India have become costlier as compared to other countries and this has become a huge burden for the exporters. The total tax collected including fuel and other accounts on the exports comes to nearly 7% of the export value. On top of this, the current basis for export incentives are undefined and there are major challenges to fix in tax refunds too. He emphasised that his expectations on the new scheme and the Government are high.

Mr. Shivadass then elaborated on the Export Promotion Schemes in India prior to MEIS. The Schemes which included, Focus Market Scheme, Focus Product Scheme, Market linked Focus Scheme, Visehesh Krishi Gramin Vdyoga Yojna, and the Argi infrastructure incentive Scheme. Following this, he talked about the MEIS Scheme in detail, the reasons why the MEIS Scheme should be replaced as per the WTO’s direction, etc.

Towards the end of his presentation, Mr. Shivadass described the objectives, features, structure, and the timeline of the new RoDTEP Scheme. While concluding his session, Mr. Shivadass pointed out instances in the new Scheme where corrective measures/action is required to make it suitable for Indian exporters.

After Mr. Shivadass’s presentation, the meeting was open for Questions from the participants.

Mr. Venugopal concluded the meeting by thanking all the speakers and the participants.

Around 74 participants attended this session.