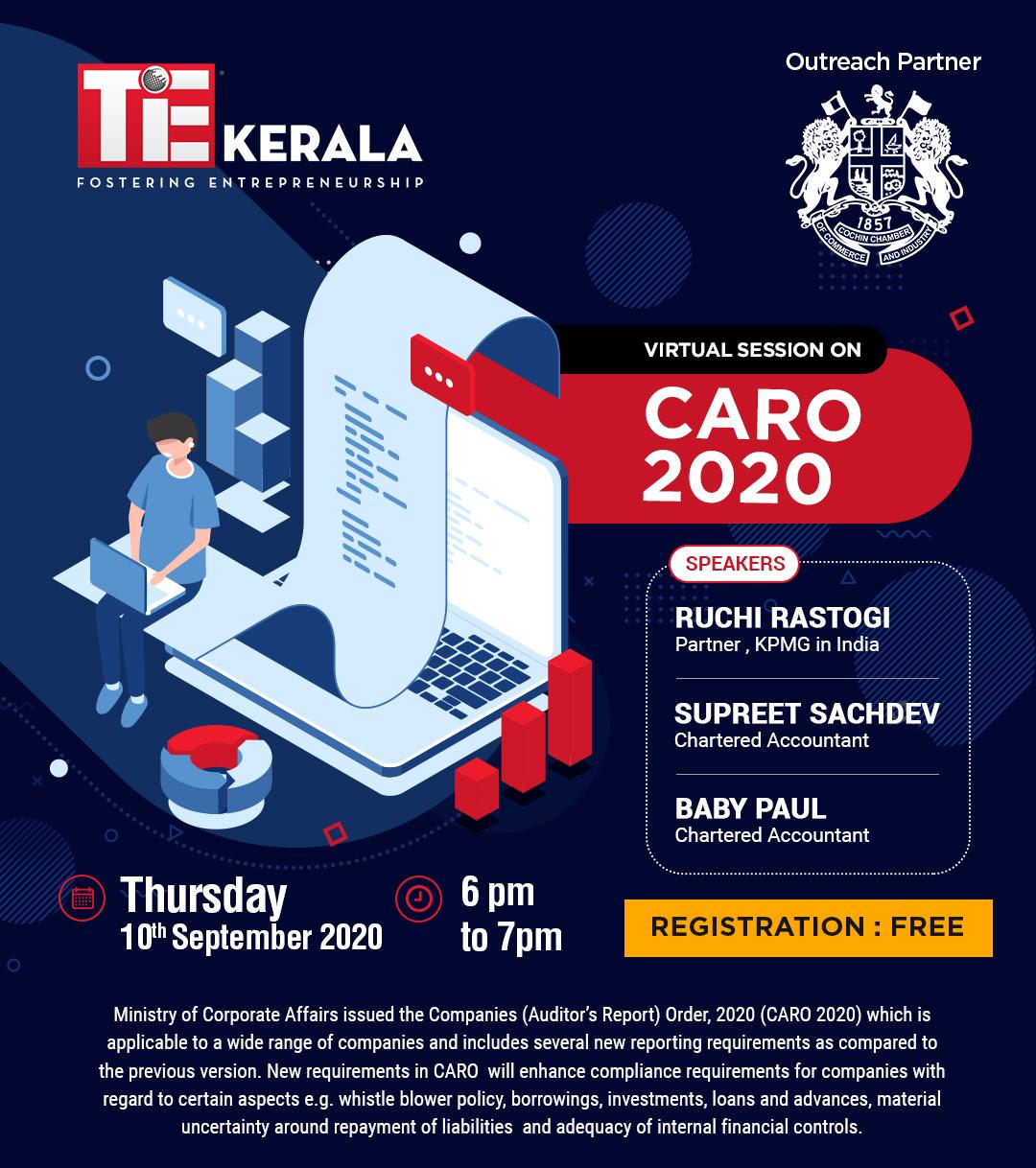 The Cochin Chamber of Commerce and Industry partnered with TiE, Kerala in organising a Virtual Meeting on the Companies (Auditor’s Report) Order, 2020 (CARO 2020) on Thursday, 10th September, 2020 on the Zoom Platform.

Mr. Nirmal Panickar, Executive Director, TiE, Kerala welcomed the participants to the virtual meeting. The President of the Chamber Mr. V Venugopal introduced the Speakers at the meeting.

Mr. Sachdev said that CARO 2020 is a new format for issue of Audit Reports in the case of statutory audits of Companies under the Companies Act, 2013. CARO 2020 has included additional reporting requirements after consultations with the National Financial Reporting Authority (NFRA). NFRA is an independent regulatory body for regulating the audit and accounting profession in India. The aim of CARO 2020 is to enhance the overall quality of reporting by the company auditors, he said.

Mr. Sachdev explained that CARO 2020 is applicable for all statutory audits commencing on or after 1 April 2020 corresponding to the financial year 2019-20. The order is applicable to all companies which were covered by CARO 2016. Accordingly, the order applies to all the companies except One person companies, Small companies (Companies with paid up capital less than/equal to Rs 50 lakh and with a last reported turnover which is less than/equal to Rs 2 crore), Banking Companies, Companies registered for charitable purposes and Insurance Companies.

Mr. Sachdev said that the main objective behind CARO is to basically augment the overall quality of reporting by Company Auditors. CARO 2020 is anticipated to build up accountability, faith and transparency to stakeholders of the Companies. CARO 2020 follows the same layout of provisions like CARO 2016 with an addition in reporting and modifying disclosures and increasing scope of an auditor.

Mr. Paul said that there will be stringent comprehensive reporting of loans or other borrowings. It requires the Auditor to report whether the Company is a declared wilful defaulter by any bank or financial institution or other lender. He further added that the Auditor shall have to assess the authenticity of the complaint, whether it has been resolved, whether reflected in financial statements which in itself require investigating into whistle blowing mechanism which in itself is a tedious task.

About the internal audit system, Ms. Rastogi said that the Auditor is required to report as to whether the Company has an internal audit system that is commensurate with the size and nature of its business. Though this point has been rightly included however it adds a layer of responsibility on the Statutory Auditor and also increases the chances of ego clashes due to segregation of audit and non-audit services.

Following this, there was a brief discussion wherein the Speakers clarified the issues raised by the participants.

The meeting ended Mr. Panickar thanking everyone for having participated in the meeting.