Beyond the Pandemic - How to move ahead 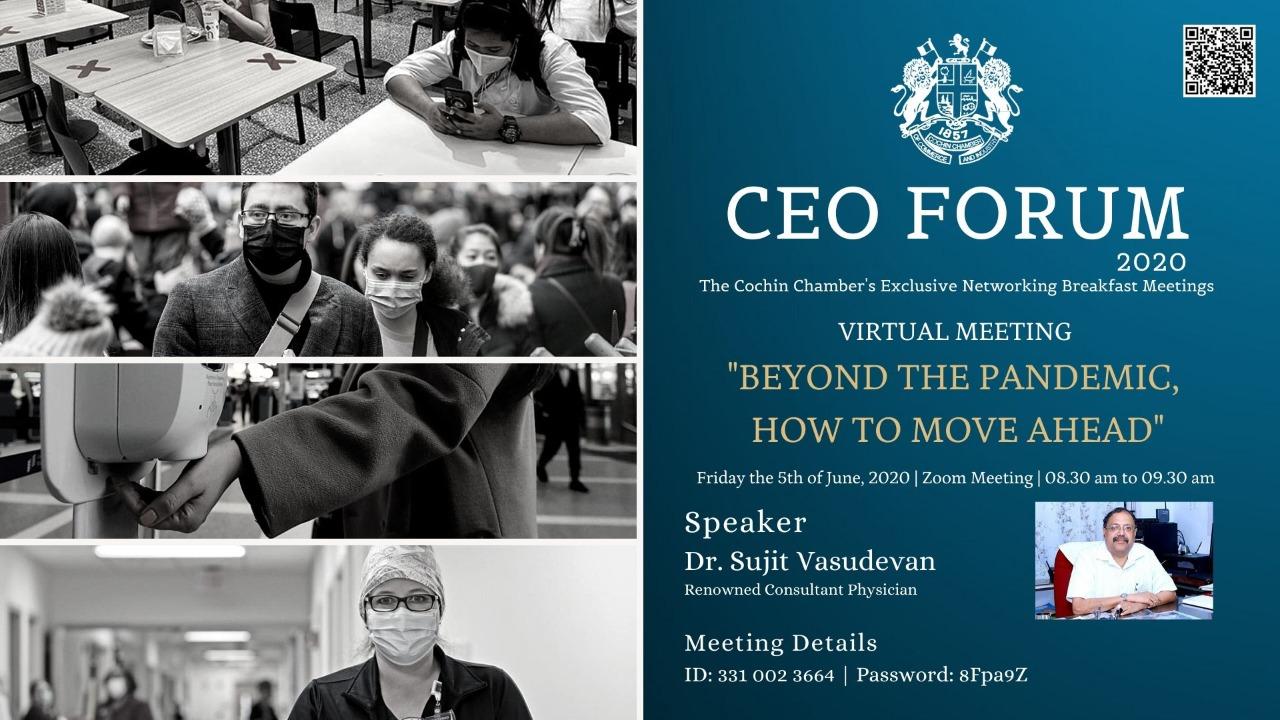 The Cochin Chamber of Commerce and Industry conducted a Virtual CEO Forum Meeting on Friday, 5th of June, 2020.

Dr. Sujit Vasudevan, a Renowned Consultant Physician with over 35 years of experience in private Medical Practice was the Speaker at the meeting and he spoke on “How to move ahead, beyond the Pandemic.”

The President of the Chamber Mr. V Venugopal welcomed the participants to the virtual meeting.

Dr. Vasudevan gave a brief description of COVID-19 and mooted the possibility of the virus remaining with the human population for the near future. The 2002 outbreak known as SARS (Severe Acute Respiratory Syndrome) and the 2012 outbreak of MERS (Middle East Respiratory Syndrome) both originated from a similar strain of virus. Because specific antiviral treatments and vaccines are still under development, testing, quarantine, and social distancing are encouraged to prevent COVID spread, he said.

Dr. Vasudevan suggested frequent hand washing with an alcohol-based hand rub or soap and water, avoiding touching eyes, nose, and mouth, and practicing respiratory hygiene. He also explained the use of various masks and the need for proper disposal of the same. Restrictive measures like social distancing, lockdown, case detection, contact tracing, and quarantine of exposed are said to be the most efficient actions to control the disease spreading, he added.

Dr. Vasudevan said that a delay in detection and response in major countries, led to an excessive burdening of the local health systems. On the other hand, some countries had adopted effective strategies to contain the infection and had recorded a very low number of cases since the beginning of the pandemic.

Dr. Vasudevan shed some light on the efforts of countries like New Zealand, South Korea, and Hong Kong which were successful in flattening the curve. One of the key factors in the success of these countries was continuous testing, isolation of the infected, and quarantining of contacts. On the other hand, countries like Italy, Spain, the United Kingdom, and the United States delayed implementing containment measures and failed in anticipating the impact of the pandemic. The health care system was literally overwhelmed with new cases, with a considerable number of them in critical conditions, he said.

As compared to other countries worldwide, a very low number of tests have been conducted in India, though the testing is expected to increase in the near future, Dr. Vasudevan added. At the same time, the capacity for rapid testing at the primary level should be implemented, to identify cases earlier and limit the transmission. He also pointed out the importance of producing a large supply of PPE for the safety of health care workers and increasing the number of available ventilators, in case the outbreak worsens.

Dr. Vasudevan said that it’s high time India run rapid antibody testing on a large scale to identify who is already immune to the virus. Moreover, months are needed before a vaccine is developed and approved. Even though herd immunity develops over time, vulnerable groups such as the healthcare workforce and elderly people should still be safeguarded. He explained the importance of adopting smart working and staggered shifts to mitigate COVID-19 transmission in the future.

Looking into the near future, containing the COVID-19 epidemic is likely to take several months. Testing, contact tracing, isolation of infected and precautionary self-isolation of contacts is critical in reducing the number of new cases. An exceptionally high degree of understanding in the population and acceptance of these measures is also critical, Dr. Vasudevan said.

Following this, there was a brief discussion wherein the Speaker clarified the issues raised by the participants.

The meeting ended with the Vice President of the Chamber, Mr. K Harikumar thanking everyone for having participated in the meeting.